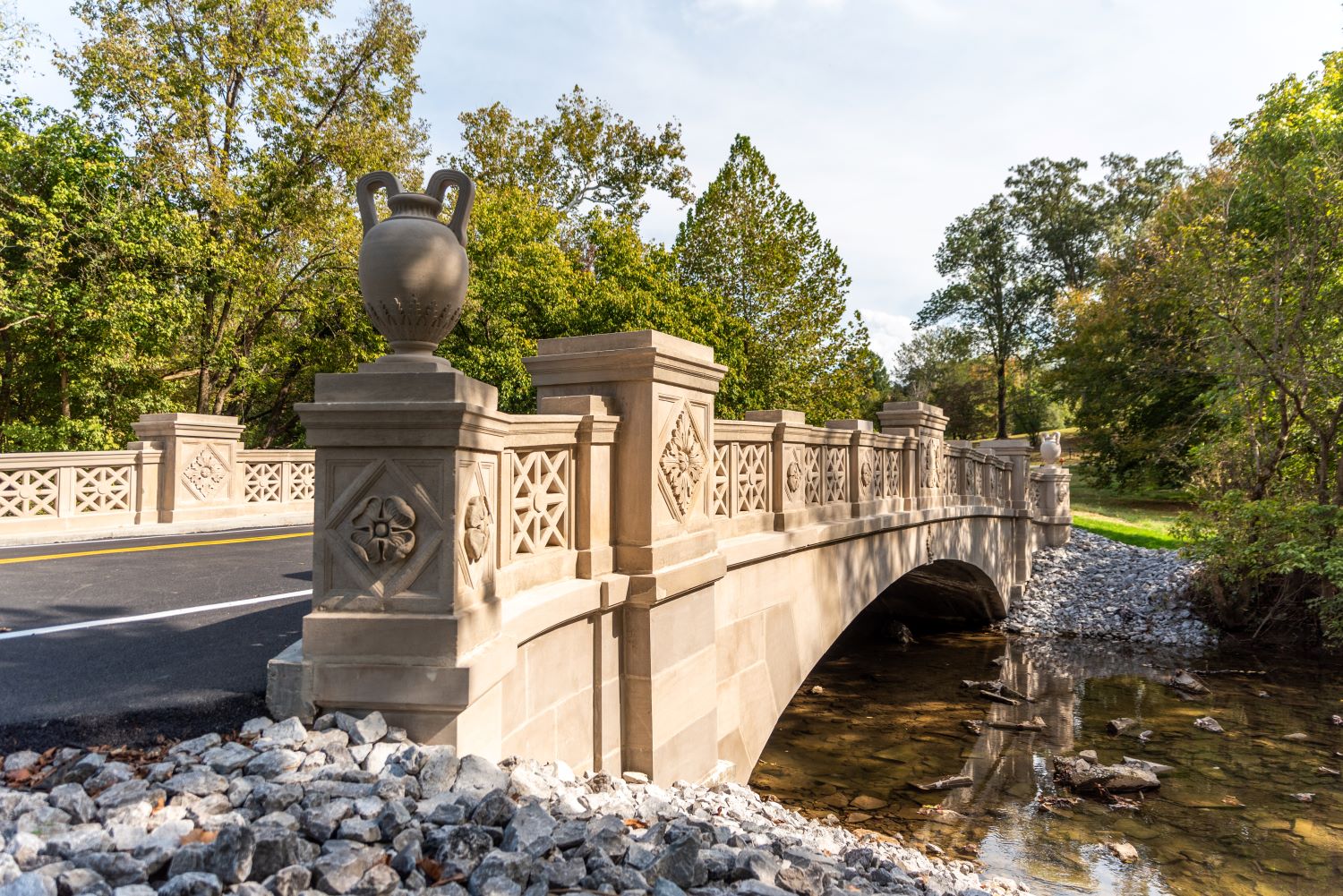 The bridge, dedicated to Bernard and Rosa Dreyfuss Bernheim, first opened in 1933. To celebrate the bridge’s reopening, a rededication ceremony was held Oct. 15 with descendants of the Bernheim family in attendance.

About the Bernheim Memorial Bridge Restoration
Bernheim Memorial Bridge opened in 1933, crossing the Middle Fork of Beargrass Creek in Cherokee Park. The bridge’s ornate parapet stone walls, complete with towering urns, draped against the scenic landscape of Cherokee Park make it one of the city’s most distinctive bridges. But due to damage from flooding and heavy use over decades, the bridge was in desperate need for structural repair and restoration in 2019.

The Bernheim Bridge was identified by the Kentucky Transportation Cabinet as part of the Bridging Kentucky program, a commitment to improve the safety and soundness of bridges across the commonwealth. The bridge’s $1,144,000 rehabilitation, funded by Bridging Kentucky and managed by Louisville Paving and Construction, began in March 2019 and was estimated to take eight months to complete. The project began with an exhaustive research and removal process to ensure the historical accuracy of the façade during the reconstruction.

“The bridge itself is a very unique structure,” said Jeff Brannon, from Marr Company, Inc., a family owned masonry company assisting Louisville Paving with the project’s stone restoration. “Nothing square, everything skewed, built like a piece of Amish furniture with mortise and tenon, and dovetail features. This posed a daunting challenge in deconstruction.”

Upon disassembling the bridge, each piece of stone was labeled and documented for location on drawings, dimensioned, and stored on site. Salvageable stone would be used in the bridge’s reconstruction, although approximately half of the stone on the existing structure was unusable. The highly decorative pieces were sent to Architectural Stone in Bedford, Ind., for precise study, renovation, and reproduction.

Several unique pieces, specifically the urns and keystones, required extensive hard work and the touch of a master stone cutter. Representatives from Architectural Stone often commented on how all the employees expressed interest in the project based on the size of the pieces of stone they were creating. This bridge was built with massive pieces of stone, uncommon in comparison to today’s projects.
Louisville Paving excavated to the concrete arch, lining the arch with waterproof material and drilling drain holes to facilitate the removal of flood waters from Beargrass Creek.

The bridge was then reassembled, using the same techniques for hoisting and managing pieces that were used in the original construction, except for opting to use less corrosive stainless-steel anchorage mechanisms over historic iron bars and straps. As the stone was reintegrated, asphalt and concrete curbs and sealing were added by Louisville Paving. The bridge reopened on Oct. 1 – both on time and on budget.

“All in all, I am extremely proud of what we were able to produce. The extra effort in planning and research really paid off in the end. I don’t think a better group of people could have been assembled to complete this project, with special mention of Curt Adams and Architectural Stone in the outstanding work they do,” continued Brannon.

The History of the Bernheim Memorial Bridge In 1928, Berry V. Stroll, president of the Board of Park Commissioners, accepted a donation presented by Ben Bernheim from the children of Bernard and Rosa Dreyfuss Bernheim to the city to be used to create a permanent bridge in Cherokee Park. Later that year, The Olmsted Brothers helped choose the location for Bridge #8 as the site of the Bernheim Memorial Bridge. In 1923, the Louisville civil engineering firm of Stonestreet and Ford and the architecture firm Joseph and Joseph worked closely to create plans for the design.

Construction was overseen by J.U. Schickli and Brothers (a Louisville contractor active throughout the twentieth century) and Champion Wire and Iron Works (still in operation today) helped produce the bronze work. The total estimated cost of the bridge was $20,000. On February 19, 1933, the Bernheim Memorial Bridge was completed with a bronze plaque memorializing the Bernheims, and four bronze standards – which were later replaced with neo-classical garlanded urns.

The History of the Bernheims and The Olmsted Brothers Born in Germany in 1848, Isaac W. (I.W.) Bernheim immigrated to the United States in 1867 and his brother, Bernard Bernheim followed soon after. I.W. and Bernard made their name in the whiskey distilling business, and in 1888, became the largest distiller in the nation, and moved to Louisville to purchase Pleasure Ridge Park Distillery. I.W. participated heavily in community and philanthropy, and in 1929, bought and endowed the land that became Bernheim Forest, which today, stretches across 16,000 acres in Clermont, Ky.

In 1931, The Olmsted Brothers firm in Brookline, Mass., began work on the Master Plan for the landscape of the arboretum, and their original landscape design was adopted in 1934.