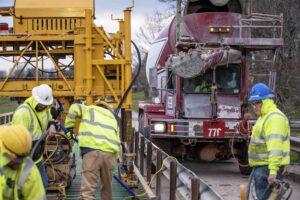 FRANKFORT, Ky. (May 22, 2019) – The Kentucky Transportation Cabinet (KYTC) announced plans this week for a major design-build project that will advance construction of more than 100 bridges in eastern and southeastern Kentucky. The project is part of the state’s Bridging Kentucky Program, a statewide initiative that represents an unprecedented commitment to improve the safety and soundness of bridges throughout the Commonwealth, restoring more than 1,000 bridges in six years.

The state is using this innovative approach to bring additional value to the bridge program by addressing a large group of critical bridges in the region under one contract.

“Ensuring the safety of bridges and roadways across Kentucky is our top priority,” said KYTC Secretary Greg Thomas. “This project will allow us to efficiently replace a large number of bridges in poor condition so they are safe for school buses, emergency vehicles, commercial trucks and all travelers.”

“We have a large concentration of bridges that need to be replaced in eastern Kentucky. More than half of the bridges in the program are located east of Interstate 75,” Meredith said. “By combining these projects into one larger design-build project, we expect to reduce construction costs for the program. We also expect that having a single team building these bridges will improve coordination among the tightly clustered projects and lessen the impact on travelers.”

The planned eastern Kentucky design-build project is part of a busy year for bridge construction across the Commonwealth. In 2019, KYTC will move more than 400 bridge projects from design and planning to construction through the Bridging Kentucky program, making this one of Kentucky’s busiest years of bridge building.

Of the nearly 120 bridges in the program that have moved to construction so far, more than 20 are completed and have reopened to traffic.

“We’re seeing tremendous progress,” Secretary Thomas said. “KYTC is moving quickly to reopen closed bridges and restore bridges that are below their required capacities. This program will provide many long-term benefits to all Kentucky taxpayers by reducing annual maintenance costs and improving safety throughout the Commonwealth.”

Bridging Kentucky has launched a website and social media channels to share additional information about the program. The site, http://www.BridgingKentucky.com, provides an overview of the program, frequently asked questions and the full list of bridges that will be addressed through the program.