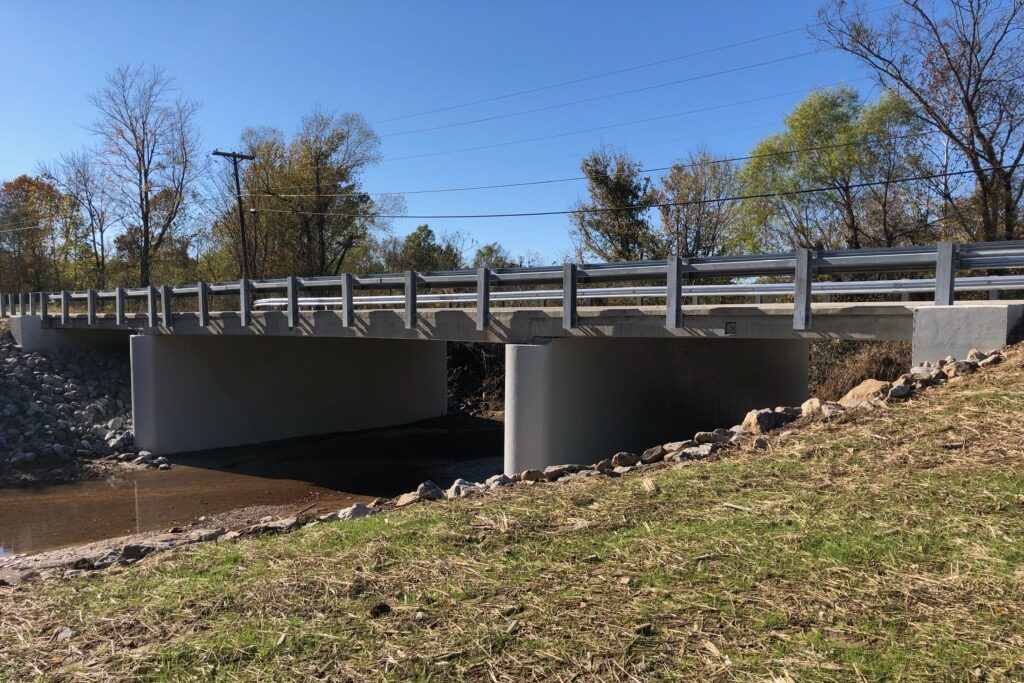 Bridging Kentucky is a six-year, statewide program that represents an unprecedented commitment to improve the safety and soundness of bridges throughout the Commonwealth by replacing or rehabilitating more than 1,000 bridges.

The 100th bridge completed through the program is located in southern McCracken County in Western Kentucky. The new, three-span bridge carries KY 339/Clinton Road across Massac Creek and serves more than 2,200 vehicles per day on average. The $1.1 million bridge replacement project, completed by Harold Coffey Construction Co., started in mid-August, and the bridge reopened to traffic two weeks earlier than planned on Nov. 1.

“This bridge replacement is a terrific example of the impactful progress this program has made in a little more than a year,” said Royce Meredith, KYTC’s Program Manager for Bridging Kentucky. “The state is working hard to reopen closed bridges, eliminate weight restrictions that limit travel and restore critical crossings throughout the state.”

Under the $93.3 million contract, the team will complete design and construction to replace 106 bridges in Eastern Kentucky. The bridges are located in 21 counties, stretching from Lawrence County near Louisa to the Tennessee border and from Estill and Powell counties to the West Virginia border.

“This design-build project addresses a significant need to improve structures in Eastern Kentucky,” said Adam Knuckles, KYTC’s project manager for the Eastern Kentucky design-build project. “This is a heavy concentration of bridges in a part of the state with limited transportation options. By having one team plan and complete construction of all these bridges, we expect improved coordination and reduced impacts on travelers during construction.”

Construction will start on some of the bridges early next year, and construction for all these projects will be completed in late 2023.

With the award of the design-build project, KYTC has awarded construction contracts for about 350 bridges through the Bridging Kentucky program.

“The program is off to a fast start since KYTC launched it last year,” Meredith said. “Travelers across the state are already benefiting from the major investment the Cabinet is making in its bridge inventory.”

Bridging Kentucky has launched a website and social media channels to share additional information about the program. The site, http://www.BridgingKentucky.com, provides an overview of the program, frequently asked questions and the full list of bridges that are being restored through the program.